Carroll's first mention of a Bandersnatch, in the poem 'Jabberwocky' (which appears in Through the Looking-Glass), is very brief: the narrator of the poem admonishes his son to 'shun / The frumious Bandersnatch', the name describing the creature's fuming and furious character.[3] Later in the novel, the White King says of his wife (the White Queen): 'She runs so fearfully quick. You might as well try to catch a Bandersnatch!'[1]

In 'The Hunting of the Snark,' while the party searches for the Snark, the Banker runs ahead and encounters a Bandersnatch:

And the Banker, inspired with a courage so new
It was matter for general remark,
Rushed madly ahead and was lost to their view
In his zeal to discover the Snark.
But while he was seeking with thimbles and care,
A Bandersnatch swiftly drew nigh
And grabbed at the Banker, who shrieked in despair,
For he knew it was useless to fly.
He offered large discount — he offered a cheque
(Drawn 'to bearer') for seven-pounds-ten:
But the Bandersnatch merely extended its neck
And grabbed at the Banker again.
Without rest or pause — while those frumious jaws
Went savagely snapping around —
He skipped and he hopped, and he floundered and flopped,
Till fainting he fell to the ground.
The Bandersnatch fled as the others appeared
Led on by that fear-stricken yell:
And the Bellman remarked 'It is just as I feared!'
And solemnly tolled on his bell. 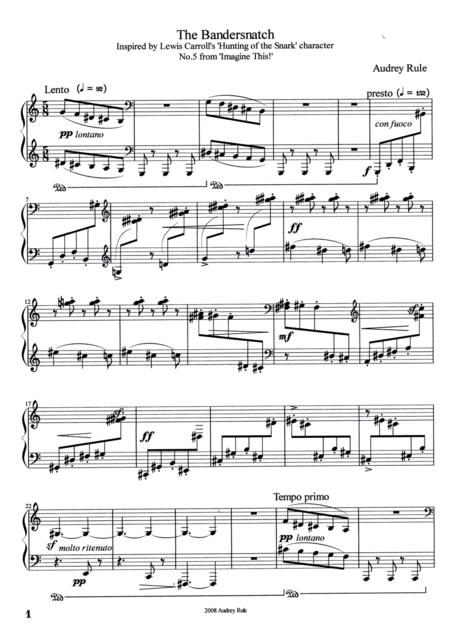